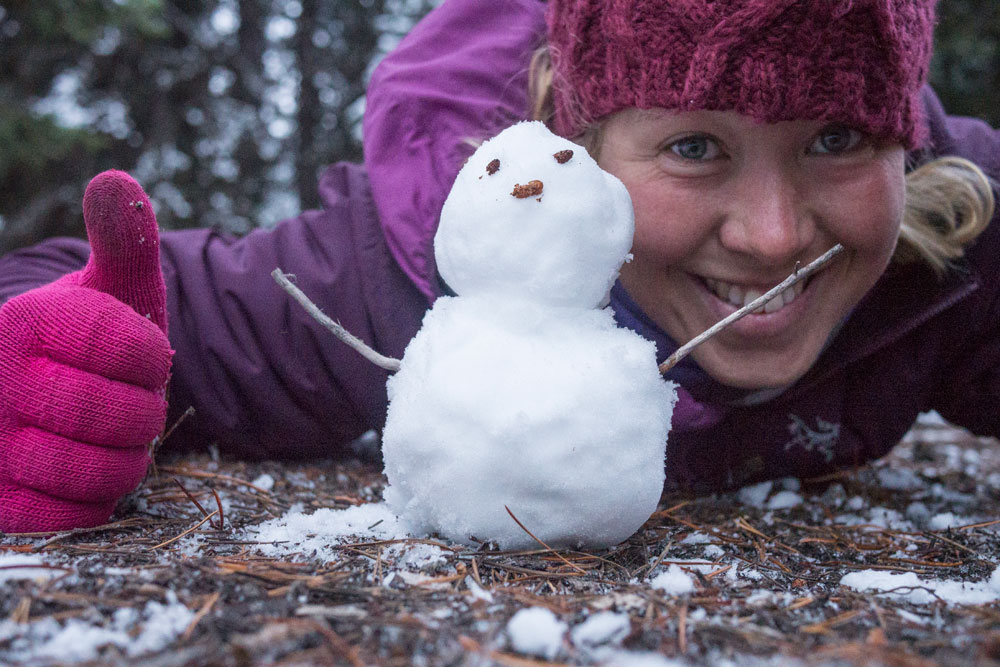 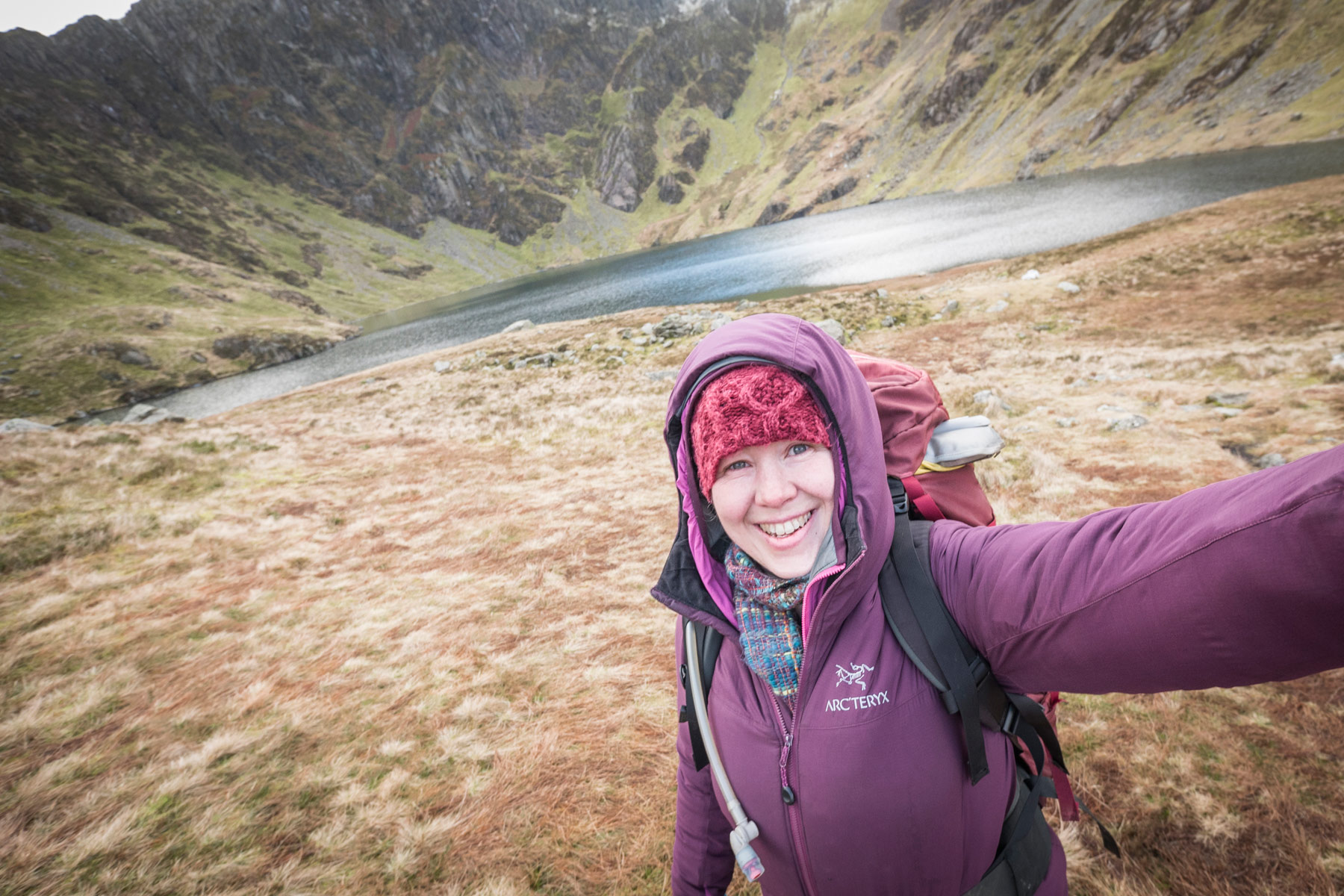 Hannah Maia could have had a honeymoon but chose a mega inspiring megamoon instead. Hailing from Manchester, her love for adventure led her and her husband to America. Hannah and Patrick celebrated the start of married life together by canoeing down the Grand Canyon. If that wasn’t epic enough, they then embarked on a three month cycle trip from New Mexico to Banff, Alberta. Hannah documented their awesome adventure in her award-winning film: Megamoon.

Recently, Shextreme had the pleasure of chatting with Hannah about her creative motivations, life lessons and filmmaking tips for all you wonderfully wild women in extreme sports and adventure:

What was the big a-ha moment that made you realise you wanted to follow a creative path and become a filmmaker?

I’ve always been creative but I never really thought about becoming a filmmaker. In fact sometimes I even struggle to think of myself as one now.  I studied social anthropology and loved it. I enjoyed looking at the amazing differences and vibrancy between societies whilst at the same time acknowledging that on many levels as human beings we aren’t all that different either. I suppose this definitely feeds into my interest in filmmaking now. 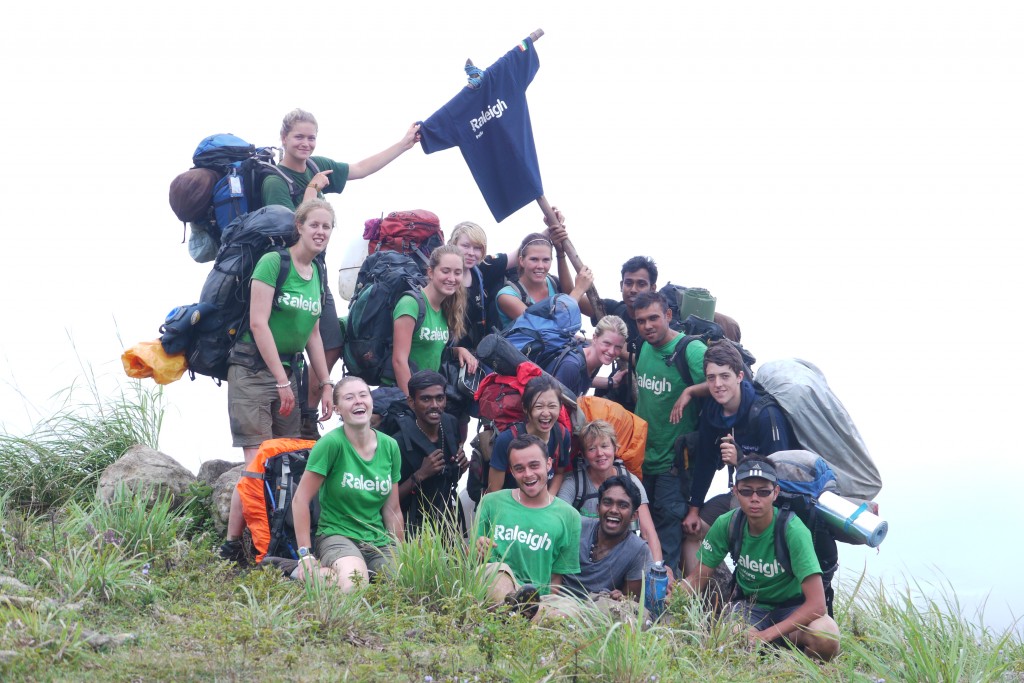 I then went on to study Visual Anthropology as a Masters which is where I first started to use a video camera but in some ways ended up feeling pretty disillusioned with it. I struggled with the idea of an observational approach, as I felt it was impossible to escape your own subjective approach as a filmmaker/researcher.
After studying I volunteered with a charity called Refugee Youth working on participatory video projects which was a brilliant and vibrant experience. That led to me working with another charity called Raleigh as a filmmaker on a 7 week expedition to India.  A few more paid work jobs rolled in and I decided to quit my full time employment to see if I could make things work on my own. 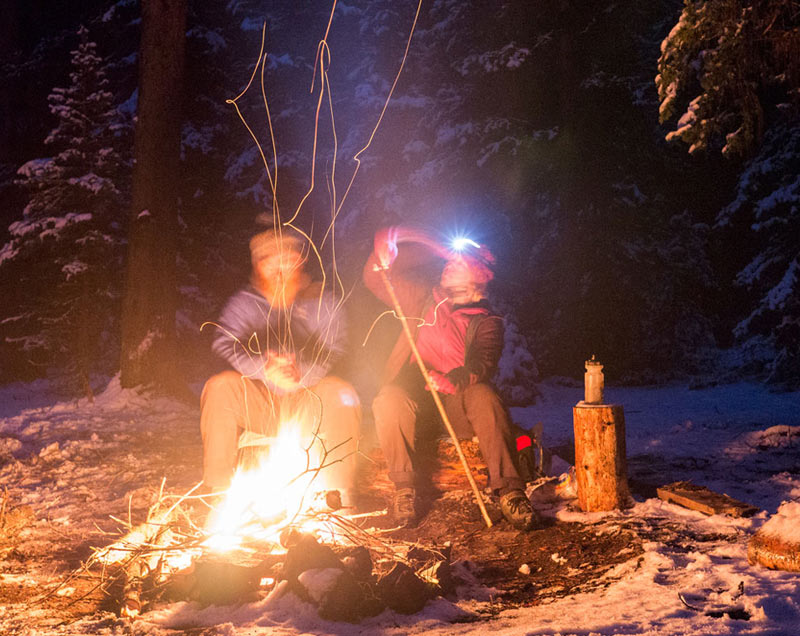 In your award-winning adventure film Megamoon, you were a magnificent multi-tasker! You worked on both sides of the camera as a cinematographer/editor and you also featured on screen too with your husband. Can you talk us through that process and offer any advice for female filmmakers who are planning to make a film in which they will also feature on screen as a subject?

I never went to film school I just started out by filming small adventures at weekends. Often that was just a bike or canoe related adventure which inevitably meant I had to get in front of the camera as well as behind it. As much as anything I was capturing and creating memories. I think it’s a great place to start for anyone wanting to make films.

I suppose you could say I became a Jack of all trades and master of none. As I get more into filmmaking I can appreciate specialist roles with a crew of people does create professional results but I love having an insight into the demands of the different roles.

If you’re planning to film your own adventure my number one tip would be to always keep your camera close. Always! When I was biking across America filming Megamoon I kept my camera in my handlebar bag. I made a DIY foam padding thingy to keep the camera secure. One time in New Mexico it rained and the roads turned into this crazy wheel sucking muck where we had to push. It was pretty grim. Had my camera not been so handy there is no way I would have filmed because the experience itself was hard work.  But because it was just there I was able to get a few shots which are in the film. It’s the highs and the lows which will make the film interesting. 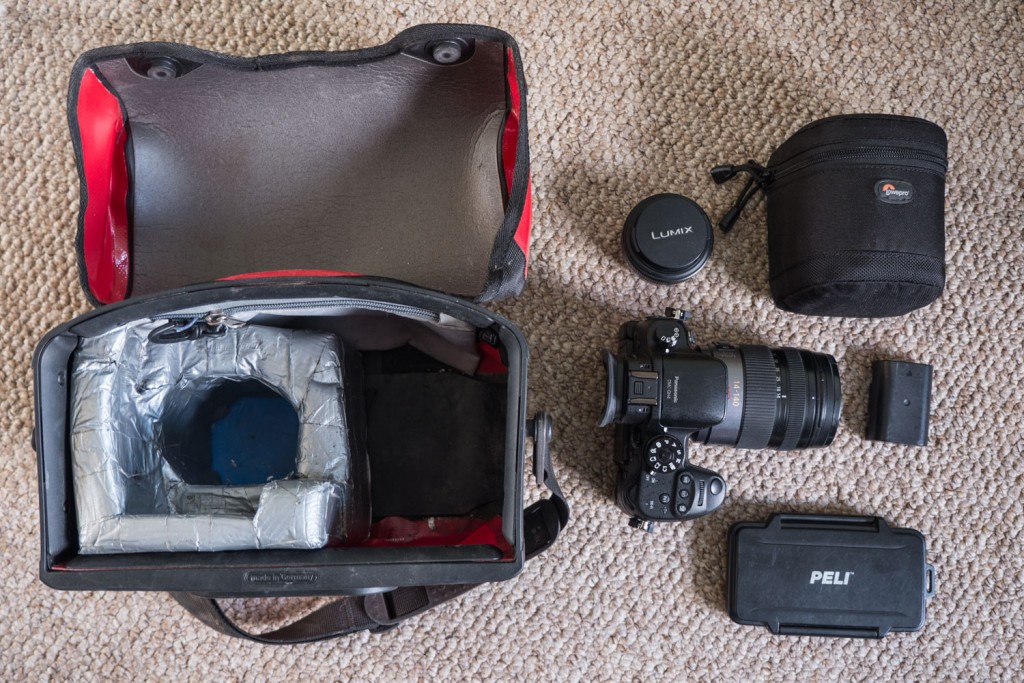 If you’re planning to film your own adventure my number one tip would be to always keep your camera close. Always! When I was biking across America filming Megamoon I kept my camera in my handlebar bag. I made a DIY foam padding thingy to keep the camera secure. One time in New Mexico it rained and the roads turned into this crazy wheel sucking muck where we had to push. It was pretty grim. Had my camera not been so handy there is no way I would have filmed because the experience itself was hard work.  But because it was just there I was able to get a few shots which are in the film. It’s the highs and the lows which will make the film interesting.

What technical equipment is a must-have when you’re filming out on the road?

The only must have is a camera. Although sound is often overlooked and can really add depth to a film.  I carry my Zoom H4n sound recorder around with me most of the time if only to capture ambient sounds. Even phones record relatively good footage now so don’t let gear become a barrier to making films.

When I’m on the road adventuring then I’ll also have multiple hard drives to back-up footage.  And when I was in the Grand Canyon I used Goal Zero solar panels to charge batteries which was very useful. 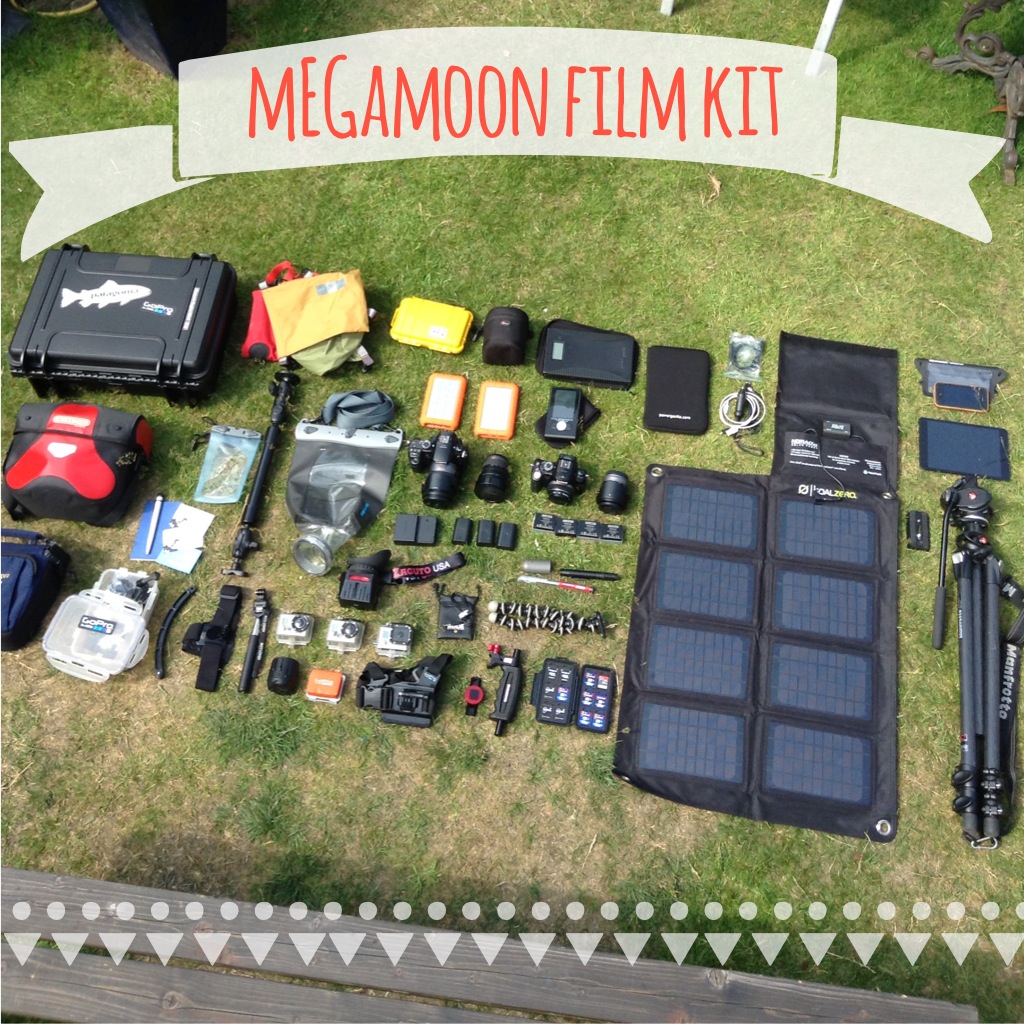 Can you pretty please share a top camera, sound or editing tip that will help our Shextreme filmmakers’ masterpieces shine?

When you’re actually filming a situation think in threes. It will help you immensely when it comes time to edit. By working with threes in mind I’m trying to be nice to my future self in the editing room – it’s about capturing a sequence and beginning to think how the shots might tell the story. So rather than just grab the one shot think of it in terms of wide, medium and tight or alternatively, beginning, middle and end. So for example, in Megamoon I’d just had a bike mechanical and wanted to illustrate how tired and frustrated I was at having to push my bicycle back to the campsite. Rather than just grabbing the one shot I made a three shot sequence. These were: 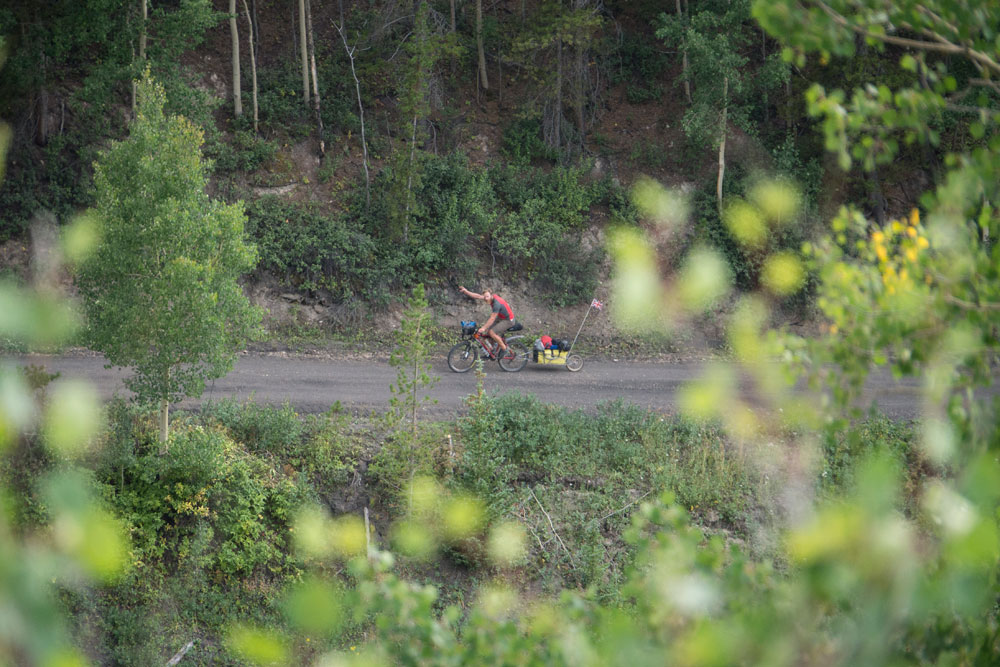 What is the most significant lesson you’ve discovered that has had a positive effect on your filmmaking?

It’s a bit of a cliche but the truth is you have to practise. To make good films you will inevitably have to make a few crap ones first. And that’s ok, as long as you keep learning and improving. Keep yourself psyched by making films about topics that interest you.  Even if you get to a place where people pay you to make films ensure a good chunk of your time is spent making films that excite you.

Recently I’ve started to think a lot more about story. I’ve started reading screenwriting books and thinking how they can be applied to documentary. It’s motivated my inner geek and I’m finding it really interesting!  Consequently, the personal film I’m working on at the moment is a fulfilling experience. I hope it translates onto the screen when I stitch it all together but I’m at least I’m learning a lot from the process.

From filming yoga retreats in Wales to New York with Air France, you are also a successful commercial adventure filmmaker. We salute you boss lady of Maia Media. Can you explain why you decided to set up your own independent production company?

I set myself up as Maia Media because I wanted to get on with doing something I really loved full time. Without qualifications I thought I probably wouldn’t get a job within the industry that I’d find that fulfilling.  I’m not great at interviews and often fall short of selling myself, but I had enough confidence to know I could do the work.  At this time I was receiving positive feedback online from videos I was making just for fun so decided to make the jump. 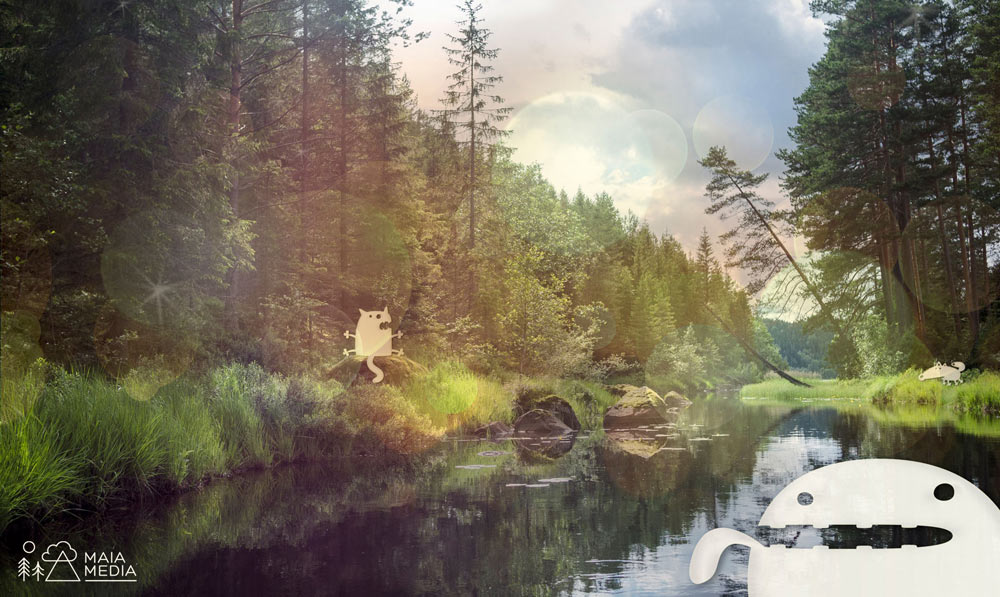 The job for Air France for example came about because I’d made my own DIY helmet cam rig to practice POV shots. I’d taken it to Blackpool beach and made a short film which was then spotted on Vimeo. Several months later I was sitting on a plane in an Air France business class seat on my way to a paid job in New York as a DP on an interactive commercial.

I’ve been working as Maia Media full time now since 2011. Most jobs I have both excite me and makes me a little nervous. There are always new challenges, creative considerations or technical complications, but I think nerves are a good thing. I don’t like sticking to my comfort zone.

Every voice matters. How do we encourage more women in extreme sports to get out there and share their adventures on the big screen?

Every voice really does matter! I’m a fan of the director Jill Soloway and she talks about the divided feminine and the need for female subjectivity. She’s made a call for women to pick up their camera and tell a story. I definitely support that. I definitely want to watch films with women both in front and behind the camera.
I’m sure initiatives such as Shextreme Film Festival can help to establish a platform for women filmmakers. It becomes a safe place to celebrate and share stories. We just need to make sure we celebrate the diversity within female voices too.

Thanks so much Hannah! You really are one of the gnarliest and nicest adventure filmmakers out there. Can’t wait to hang out with you at Shextreme Film Festival 2016.